Our Ultra Gain self-adhesive front projection film made a prominent appearance at the recent high-profile Ecommerce 1to1 conference in Monaco.

Suspended 6 inches above the stage surface, alongside the presenters’ podium, was a 3-metre tall, 1.8-metre wide plexiglass panel. Applied to the entire front surface of the panel was a single piece of Pro Display’s Ultra Gain self-adhesive projection film. 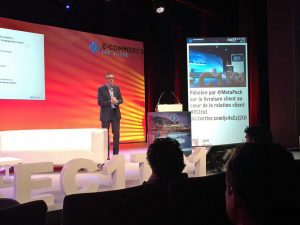 As the pictures below show, the front-projected screen played an important role in supporting the speakers and bringing their presentations to life. The decision by the set designers to ‘go portrait’ was an inspired one, creating a commanding visual focal point and lifting the stage set beyond the usual conference fare.

The floating portrait screen works brilliantly alongside the presenters, complementing the content of their keynote speeches while feeding live social media to the audience. Here are a few pictures from the show – we’re sure you’ll agree that Ultra Gain puts in a great performance, with bright whites, with excellent contrast and colour.