Switchable Glass is an incredibly versatile product, integrating seamlessly into homes, visitor attractions and commercial spaces all over the globe. Appearing frosted in its off state at the touch of a button the glass becomes transparent, offering a clear field of vision through the glass maintaining the option of privacy at any time.

Whilst extremely popular in home renovations and corporate offices, we’ve seen our switchable technology used in 100’s of bespoke applications over the years from creating a switchable pool floor on board a superyacht to switchable aquariums for world-touring art exhibition. In amongst these creative projects, one of our favourite application of Switchable Glass is for product launches.

The frosted nature of the glass when turned off hides the item inside, building suspense until it’s time for the big reveal when the glass is switched to clear to display the new product. Recently we we’re a part of the launch of the new Jaguar F-Type sports car, using a huge Switchable Glass Projection Screen to wow the audience. The event organised by Concerto Live and The Brooklyn Brothers featured Jaguar’s new UK ambassador José Mourino and a host of stars including Gary Lineker, Anthony Joshua and Example. 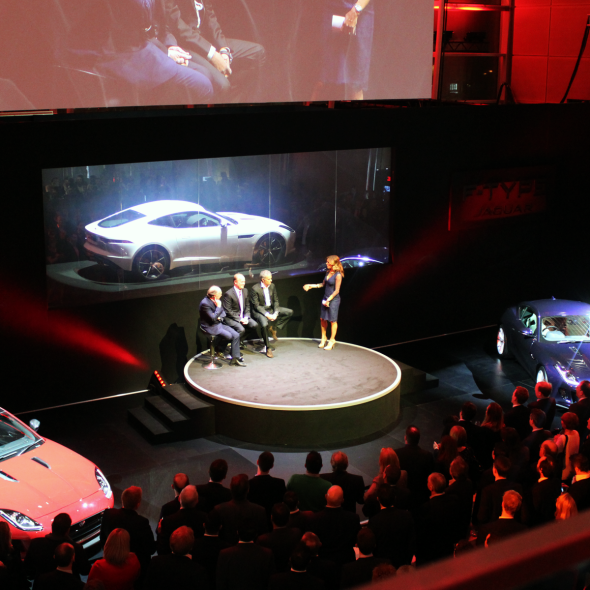 The Switchable Glass appeared frosted as the star studded audience arrived, providing the perfect conversation point for discussion about what the screen could be concealing. Integrated into a purpose built display box the Switchable Glass provided the perfect finishing touch to the centrepiece, utilising clever lighting inside the display to make the launch as theatrical and memorable as possible.

The versatility of switchable technology allowed Concerto Live to maintain the sleek, luxurious feel expected from the jaguar brand throughout the show. Using smart glass for the reveal put more traditional methods to shame, as well as streamlining the setup by providing a display screen as well as a shroud for the new Jaguar model.

Nick Robinson, managing director at Concerto Live, said: “The dramatic introduction of the F-Type Coupé was achieved in a carefully choreographed process by utilising film shot for Jaguar by world-renowned director Tom Hooper. The vehicle was concealed in a Switchable Glass box built into the main set, which then changed from an opaque screen showing high definition footage to totally transparent at the flick of a switch to reveal the vehicle. Simultaneously both sides of the set were raised with a further two cars driven to the front of the stage to complete the stunning effect.”

Pro Display Switchable Glass can be used as a rear or front projection screen, providing a HD/4K  image when turned off and producing a holo-effect image when projected onto in its on state. Available in sizes up to 1.8m x 4m, our Switchable Glass screens can even be controlled by a timer to create an exciting countdown style display for your product launch.

We offer full switchable technology solutions that can be integrated into custom built housing as well as a retrofit Switchable Film that can be applied to existing glass surfaces. Our Switchable Film is ideal for creating an eye-catching window display without the need for major disruption, letting you display new products in a way that’s guaranteed to stop traffic. Manufactured with self-adhesive properties, this film can be easily applied to instantly transform your space. Not only does our switchable technology provide you with a unique display solution, but using these on store windows can even act as a security measure to deter thieves by concealing the items behind the glass.